Nashville, Tenn. (April 7, 2014) – Over the last 20 years Felicia Hall Allen has dedicated her life to enhancing the game that provided her the opportunity to pursue her dreams. A former student-athlete at the University of Iowa, Allen has been front and center at given back to all aspects of women’s basketball on and off the court.

It was this influence that came to mind when the leaders of the Black Coaches Association decided to present Allen with the first-ever Woman of Impact Award in during its’ honor luncheon – Women of Color in Our Game: A Celebration- at the 2014 Women’s Basketball Coaches Convention in Nashville.

Coquese Washington, head women’s basketball coach at Penn State University and BCA Board member, said that the BCA wanted to recognize Felicia’s significant contributions to grow the game over the last two decades. 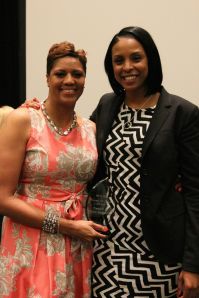 “From playing for the Iowa to executive positions with NIKE and the WNBA, to now providing legal representation, professional development and motivation to college coaches, Felicia’s positive influence continues to be felt far and wide across the landscape of women’s basketball.”

“She was the obvious choice,” said Carol Owens, BCA Board member and associate head coach at the University of Notre Dame. “Her involvement with the Ace program and her current association with coaches has impacted a lot of people’s lives. She is not even a coach but she is putting a lot of her time and money in to grow the game, enhance assistant coaches and she deserves a lot a credit for a lot of people’s success.”

The luncheon honored black female coaches whose commitment to women’s basketball has spurred the sport on to new heights.

“I didn’t realize how much our team would benefit from the session with Felicia and Johnny until the session was over. Our team was not the same. I would recommend them to any team or organization.”
Dawn Staley, Head Coach, Univ. of South Carolina